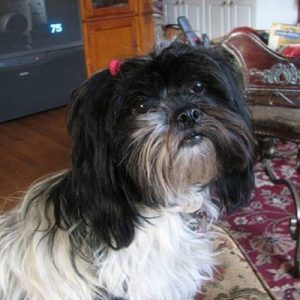 Our little Sophie (aka Sophia/Princess) was born on June 14 2005 – she arrived at Rainbow Bridge on January 9 2018 at 11:30 A.M., and took a piece of our hearts with her.After losing my little Mimi in July 2005 I was aching for another dog. My husband was not wanting to, but gave into my tears when I found an ad in the paper for Maltipoo’s in Jasper GA, so we took a ride (Aug 14 2005 8 weeks old). Sophie fit in the palm of his hand and he fell in love – even though she was suppose to be “for me” she ended up being “his little girl” and I teased him all of those 12 1/2 years that “you didn’t want her” !! Her personality was of a chatty bossy little girl – she was queen bee in a multi dog home – and she has been a tough cookie. Getting in between two larger dogs and getting her eye turned around at almost 2 yrs old to having two mammary gland (benign) surgeries at 9 and 10 yrs old with all senior tests coming out great, she suddenly started experiencing “cushings” symptoms early in 2017. She went from miss “picky finicky fussy eater” to eating like a little piglet and then losing weight and muscle. As I researched the disease (for which she had several symptoms) I did not like what I read related to diagnostic testing and treatment. We had just been through loss of our other dog (Kailee) to lymphoma – and swore I could never put another dog thru those “conventional” methods again. After months of research and the fear she was really starting to get weaker I did find another vet whose credentials seem to fit what we were looking for but it was too late. I made the appointment for Wednesday Jan 10th and Sophie experienced a seizure the morning before and took her last breath in my arms after bringing her to emergency but knowing there was nothing they could do.

This little girl had a human personality – from our chats we used to have (where she responded) to her knocking around her bowl when she was thirsty – to the paw at your leg when begging – to the rubbing of her head against your leg for affection – so many little cute habits and communications too many to list and so special and unforgettable – We will always be a multi dog family – her younger sister Julee misses her terribly – so we got a new playmate – But this new little one has big shoes to fill – we can’t even think of the perfect name – as Sophie had the perfect name that fit her to a “T” — right now its day by day and don’t think a day will go by that we do not continue her sweet little memories until we meet again and greet her and hear her sweet bark at Rainbow Bridge.

With Love and Tears Sophia Sweet Princess Always in our Hearts