After losing their beloved family Golden Retriever, Mitzy, the Stewart family became increasingly interested in afterlife pet care. During their research, they found the process of pet aquamation and this pet cremation alternative became a calling. After much planning, Heavenly Paws served its first pet in September of 2015. Since then, the community response has been tremendously supportive of the work the Stewart family has dedicated their lives to. Heavenly Paws is so proud to have reduced the greenhouse emissions of pet aftercare in the Atlanta community by 100’s of 1,000’s of Tons. In 2019 after outgrowing our original location we moved to south Peachtree Corners. The Stewarts hope aquamation can be a lasting legacy, and provide comfort to the pet families of Georgia for years to come. 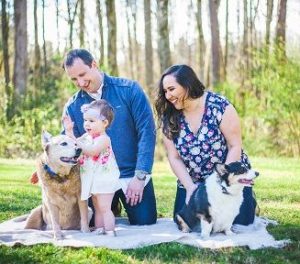 Tyler Stewart – President & CEO – Tyler is a native Georgian, and has always felt the calling to serve. The most rewarding part of his job is hearing pet parents say he made an extremely difficult time in their life a little more bearable. Tyler grew up with a deep love for animals and respect for nature. He has ‘parented’ many pets throughout the years including dogs, cats, ferrets, turtles, salamanders, and more. Tyler has a wonderful & supportive wife, an amazing daughter, three pampered pooches, Luke, Kai & Big Tom, and sassy short-hair, Roxy, making his life full. Tyler has had the unique opportunity of Aquamating two of his pets since founding Heavenly Paws, Jack (the big guy in the photo) at the age of 16 and Missy, our sweet snuggle-bug kitty, at the age of 14. It has been a privilege serving the community he was raised in.