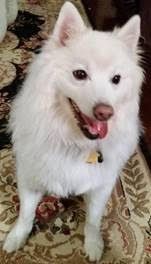 This tribute is too lengthy but it was difficult for me to say less. Not a day or night goes by since August 15, 2016, when we had to send our beloved American Eskimo (Eskie) to the Rainbow Bridge. Of the four dogs since the 1980s (Airedale, Beagle mix, and two Eskies), none quite touch our hearts and our lives as did Chance, named as in second chance. What makes it more difficult is the short period of 20 months that he was in our lives as compared to years with the others.

After we lost our Eskie, Coconut, April 10, 2014, from the dreadful canine Cushing’s disease, we grieved for her so much. That fall, I began to connect with Eskie rescue groups in the Southeast hoping to find another. We had Coconut since a puppy for 11 years, but thought perhaps rescuing a mid-to-senior Eskie would be best for all. Time passed and I continued searching online when I got an email from Dyan in Sarasota, FL, with a picture of Chance found wandering around Six Flags and picked up December 6, 2014. He was indeed such a handsome guy, far more than Coconut was beautiful. He was so Nordic in appearance and we knew instantly he was a purebred so I called about him December 12 and was told he was recovering from being neutered! What?? The vet who examined him put his age as 10 but he looked nothing close to it; however, we would soon find out the reason was his oral health. He had so many rotten teeth and as we would later find out at UGA vet school, roots were growing up through some of them! Cobb County Animal Services in Marietta said he couldn’t be adopted for another week. So December 19, we went there and he was laying down with head up, greeted us with that Eskie smile (when Eskies open their mouths to breathe, each side of the mouth rolls back like they are smiling). He was even more striking and gorgeous than in his online picture.

We went into a room to become more acquainted. Toys in there but he had no clue how to play or what to do with them. He was very friendly and we thought he was probably 7 or 8 years old, maybe less. He moved around actively, never coughed, and after some time, we wanted to give him a second chance. As he was getting inside the back seat and we were leaving, he began having a croupy cough, sounded really bad so we took him to the vet we had used for seven years and he was misdiagnosed. The cough continued to worsen when Christmas Eve, he was not eating and could hardly breathe so my husband rushed him to Blue Pearl (formerly Georgia Veterinary Specialists) in Sandy Springs where he spent the next three days. By this time, we had definitely concluded he probably had never been seen by a vet and stayed caged all the time being used only for breeding purposes. What a wasted life for this statuesque guy. At adoption his weight was 21 lbs and maximum weight for Eskies shouldn’t be greater than 28. Blue Pearl recommended additional tests just to know if any other major illnesses or diseases might be present not knowing his past, so we agreed.

After recovery, it was time for the dental exam before surgery. Afterwards when the vet (professor at UGA) phoned to say they were unable to save even one tooth, I just broke down and could not stop crying. After that fairly long dental recovery, he began in May to get that second chance with a good six months of the best life he ever lived. We were astounded he could eat kibbles so well, although I bought the puppy size mixed with some wet. He loved going to the dog parks and his favorite was us throwing a tennis ball in which he learned to retrieve. He would lay down with his paw on top of the ball, like it’s mine! We discovered Chance to be so affectionate, loving, and good much more than our previous babies. During the summer months, we noticed he began to stumble some but we thought it was his goal to beat the other dogs in getting his ball, which he always did! Then his right front paw began knuckling. We took him to our newly-found vet after the Blue Pearl incident where some x-rays, tests, were conducted and it was believed he could possibly have developed a neurological disorder we would later learn was thought to be cervical myelopathy. In November 2015, we did see a wonderful neurologist at Blue Pearl who after such a thorough exam in which he never tried to get up or wince gave us three possibilities: cervical myelopathy (affects nerves from C1 – T12 to the legs), brain lesion, or meningomyelitis (spinal inflammation). Two treatment options were offered. A MRI of brain and spine that would reveal exact diagnosis, and since the 1st was the most suspect, surgery could correct it. The 2nd was to treat him with steroids and pain meds. Aside from the exorbitant costs, we were reluctant at his age to put him through another surgery/recovery. And, what might occur next? Therefore, we elected the meds but they came with side effects, weight gain and frequent peeing that also occurred with Coconut. At least he was stable, although no longer able to run due to in time the second paw knuckling, so we were able to shower him with our love for another nine months. We put down runners on the hardwoods but in time when he could no longer get up on his own, even on carpeting, we knew it was time. I can never explain how his loss has affected us forever. He has to be among some of the most special stories of a baby who lived, what? 11 to 12 years with only six months of pain-free enjoyment.